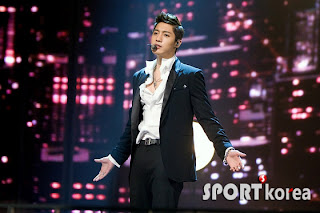 After being known as the leader of SS501, and then as an actor, since debuting some six years ago, Kim Hyun Joong is ready to embark on a new path as a solo singer.

Having released his solo mini-album “Break Down” earlier this week, Hyun Joong becomes the fourth SS501 member to do so with Kim Kyu Jong the only one not to have released a solo album.
His title track, “Break Down“, was composed by Steven Lee and is classified as a ’south urban dance track’ which combines powerful electric brass and synth sounds to create an energetic track right from its beginning phases, and has a dynamic choreography to ensure a strong performance.
He also performed “Please“, which is a pop R&B track, featuring a beautiful piano melody and a heavy orchestra arrangement that brings out the sadness of the lyrics and “Let Me Go” as well.
Check out his triple song comeback stage below!