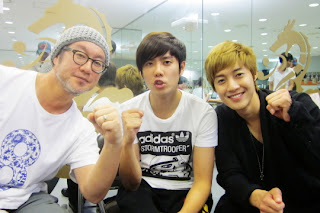 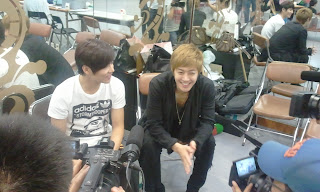 Additional photos from the visit were released today, which also included Hyun Joong’s meeting with Group 8 CEO and producer of “Goong”, Song Byung Joon. Hyun Joong had previously worked with him for ‘Boys Over Flowers‘ and ‘Playful Kiss‘.

Although they both portray ‘flower boys’ in “Goong”, fiction wasn’t too far from fact, as Kim Hyun Joong and Kim Kyu Jong easily made hearts melt with their bright smiles and handsome looks.

Netizens reacted with “It’s so sweet to see them take care of each other“, “I really want to see all the members stand on one stage“, and “Always flower boys“.

Credits: HAUTE MOMMA by Keri Zamora (The Philippine Star)
Repost from http://luxmae.blogspot.com
Reposted on newstsvn
Repost with full credit and link back to the site, PLEASE. 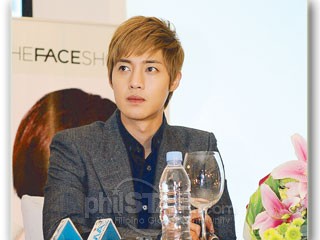 Absolutely flawless: In person, Kim Hyun Joong appears to have no pores, as though skin care began in the womb

It all started with Boys Over Flowers, where I fell in love with the second male lead character Ji Hoo, played by Korean singer/actor Kim Hyun Joong. Then I discovered, apart from acting, he was in fact the “leader” of popular Korean boy band SS501. I became an instant fan.

I flew to Yokohama for a Boys Over Flowers two-day fan event, an SS501 concert in Shanghai, and went on a drama tour in Seoul. I thought that having seen him live in those events would be enough.

Fast forward to 2011. I’ve grown to love other Korean dramas and tried my darnedest to get over watching Boys Over Flowers and listening to SS501 songs over and over again.


You can imagine my thrill when I got a text from my editor that Kim Hyun Joong was coming to Manila for Face Shop’s Asia tour and to launch his new solo mini album “Breakdown” — and she wanted me to cover the event!
Baca selengkapnya »
Diposkan oleh Hyunited6686 di Senin, September 05, 2011

Credit: en.korea.com
Repost with full credit and link back to the site, PLEASE. 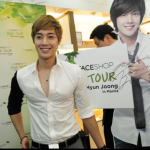 Kim Hyun Joong, leader of SS501, leading actor of acclaimed tv series and you tube hit, Playful Kiss, a contract artist of KeyEast, fresh from his Asia Tour to promote his debut album as a solo artist, Breakdown, is signing a new contract with one of the leading cosmetic company in Korea, The Face Shop from Sep 1st. 2011 to Aug 31st. 2012 with the amount of 1.7 billion won.

The Asia Tour made by Khj was not only for his album promotion but was sponsored by The Face Shop as well.. Hyun Joong’s popularity rose and the aggressive advertising campaign , the new product lines of the famous brand was  very well received by TFS patrons especially  the ladies who has been regular users of the cosmetics and those fans who just recently tried the product due to the promotion discovered how these are suited for Asian skins.

Hyun Joong , now preparing for his second mini album which is scheduled to be launched in October of this year, will definitely be doing another Asian Tour and this time, the actor-singer / artist will be showing off his performing talents and for sure carrying with him the cosmetic brand, which helped him one way or another catapult to where he is now, an International Asian Star! Your loving fans will surely await whatever it is you’re preparing for them , their only one, Kim Hyun Joong!

Credits: harukhj @ naver + + @bosu_hjvn
Chinese translation: cafe & desm986968 @ hyunjoongchina
English translation: Stephanie (@5StarsAs1/ i-kpoplovers )
Repost with full credit and link back to the site, PLEASE.
So is there a friendly soccer match between FC Miracle & FC Men?
I guess corrected...His car really came...Can't breathe at that moment...it's too good to be true
Maybe because he didn't brought his uniforms with him, so he just wore a blue tee, well anyway it looked good on him, even better
And that golden hair~
It's really hot in the day, luckily the field was under the treeshades with winds blowing.
Wow, Leewan made a few goals too! Such good skills, he can enter for the national football team already haha
Wah..HyunJoong also working hard too..running like a deer..hehe..like an unbeatable chicken too hahaha (Side note: she's probably making a joke about Jaksal)
Seeing him working so hard...♥....♥....♥....♥....♥....♥....♥ Kim HyunJoong I love you..♥....♥....♥....♥....♥....♥....♥
It's alright if his manager spotted me, just don't take my picture....please
No worry kekeke
There's no camera kekeke