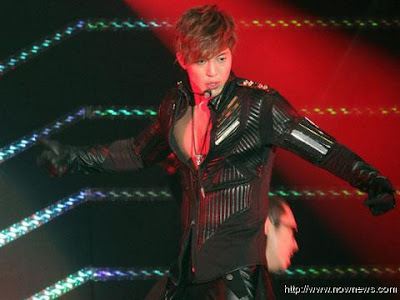 Korea popular male star Kim HyunJoong held his fan meeting on 18th. Once started he 'broke egg' to make his appearance, performing singing and dancing, revealing his abs, other than singing 15 songs passionately. He even had some interactions on stage with fans, filming 'bed show'.
'U:zoosin' Kim HyunJoong on 18th & 19th, for 2 nights hold his fan meeting at NTU Sports Center, but the stage effect was totally concert grade. Making his appearance at the start from a planet 'breaking an egg to come out', causing fans to scream. He who opened the show with hit song, wearing black jacket, with nothing inside, revealing his 'dots' from time to time (Mini UFO: erm... u know what 'dot' I m referring to right? kekeke). After the hit dance was ended, the entire line of buttons were unbutton, revealing his abs, causing his lady fans at venue to feel high!
Other than hit dance and songs, Kim HyunJoong also sang ballad passionately, even invited lucky fans on stage, giving a gigantic teddy bear as present; during mid of the show, he even drew lots to select fans to play game with him, allowing 5 lucky fans to go on stage to pose according to movie poster, among them were 'looking affectionately at each other' pose from 'Water for Elephants'; 'Standing back to back' pose from 'Pretty Woman'; 'circling waist from back flying high' pose from 'Titanic'; but there was a fan who was unlucky and selected the solo photo 'Amélie', luckily she still have Kim HyunJoong to help her took a photograph.
As for the fan who had selected the 'Joker card', originally thought that she would not have a chance for close contact, unexpectedly after being sent to back stage, staff 'placed her on bed' and pushed her out, causing the envy of all fans! Kim HyunJoong other than singing passionately to her, even made use of shadow to fake kiss her hand. However when the screen was exposed, it had been switched to 2 staff, he and his fans magically raised up gradually on stage, making lots of fans to 'feel relief' that both of them didn't 'real kiss'.
This fan meeting cost was over NT3.5million (approx USD117K), Kim HyunJoong had changed 4 sets of costume, basically it was modeled after a concert concept, singing and interactions continued until around 21:40, following by that was the High touch' moment which fans had long awaited, it was said that Kim HyunJoong had personally made the request for this activity, allowing fans who didn't have a chance to interact with him to also able to meet their idol in close contact.
Diposkan oleh Hyunited6686 di Sabtu, Mei 19, 2012 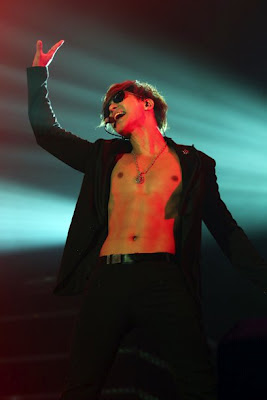 Luckily 'Uzoosin' didn't turn into 'Rain gathering God'! (*Note: Reporter playing with chinese word, as the chinese word for U:zoosin '宇宙神' has the same pronunciation as '雨驟神', which means a god who gathered rain!) Korea popular Star Kim HyunJoong held his fan meeting on 18th night at NTU Sports Center, singing 15 songs. During the game session he even coaxed fans to bed, give out a teddy bear, feign kissing to act some heartwarming show effect, intimate actions caused the envy of fans at venue and scream non-stop, instantly turn into a cassanova.

First time holding his Asia Fan Meeting Tour, stage light and effect were completely modeled after concert concept. Kim HyunJoong had been rehearsing up till night time yesterday, but today upon arrived he started his dance practice again. Full of action at times, full of passion at time, tuning his charm to the highest degree. During the opening hit dance he even revealed his abs showing his sexy side, after spending a wonderful time with his fans for around 2 hours, he promised next year during this time he will prepare even richer and spectacular performance content.

Throughout the fan meeting, Kim HyunJoong had changed 4 sets of costume, his stage cost is even more than NT3.5million, around 40 staff entourage tag along from Korea. The organizer mentioned that even the supper expenditure was also a big sum, it was really an expensive fan meeting. There will be another performance on 19th at the same venue, fans who are interested can directly purchase ticket at the concert venue.
Diposkan oleh Hyunited6686 di Sabtu, Mei 19, 2012