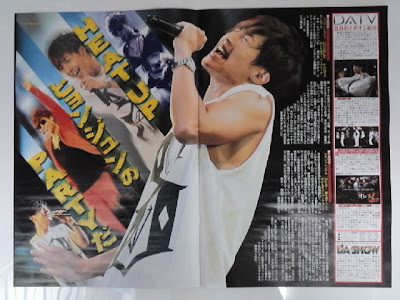 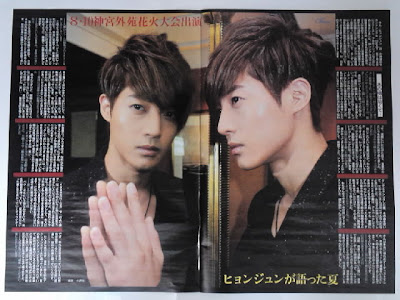 Q: Congratulations on the No.1 of Oricon 1st day sales with the second single album, “Heat” ! We understand that B’z produced this song for you. How did you feel when you heard that they accepted an offer?

KHJ: I thought that it was a joke. I could not believe it even when I received a song, nor during the production process. I met them when we had a recording of the song, then I could feel “ it’s not a joke” for the first time. Though I spontaneously said that I would like a song produced by B’z, it was eventually delivered to them thanks to many people involved. I feel now how important it is to express in a word what we have in mind.

Q: Did you get any advice from B’z?

KHJ: Nothing special. It means that they believed in me. They cared for me so that I could relax on the occasion of recording. Thanks to their encouragement, the recording was a great success.

Q: How was your first impression of the song when you listened to it ?

KHJ: As it was totally different from the music I used to do, I felt it very new to me. When I listened to the song after the mixing of the song, I thought that it was really B’z production. What you usually listen to is the completed album. There are many differences in terms of sound between the album and those in process (provided demo tapes). This time, I had an opportunity to be involved in a production process which we usually cannot see, and therefore, I could understand their uniqueness which makes them “B’z “.

Q: So, you became much enthusiastic about them, right?

KHJ: Yes indeed ! Though I am an artist too now, they were the artist I admired much when I was a child. After the debut in Japan, I could receive a song from them, which made me hit this new record. I really would like to say “thank you” to them.

Q: It was decided that you would perform on August 10 at Jingu firework festival.

KHJ: When we worked in Japan, we lived here for a certain period of time. I happened to see a firework festival which took place near the Rainbow bridge ( * famous Sumida River Firework Festival ), where many girls were dressed in “Yukata” (* an informal cotton kimono for summer wear ). I was impressed that it was a traditional beautiful festival.

Q: Many people look forward to the outdoor live performance.

KHJ: It is really honor for me to be invited for this big event. I will work hard in Korea to prepare for this live so that it would be a spice which will enhansen their expectation for the firework festival.

Q: When it comes to “firework”, do you have something which reminds you of summer holidays?

KHJ: I travelled for four days, three nights with a friend of mine with only 50,000wons. We eated at “all-you-can-eat” barbecue restaurant to the extent we could not eat anymore, thus skipping meals after that (to save money). We walked here and there, riding on a bicycle and so on. We really enjoyed it. Even asked, I don’t think that I can travel in this way anymore. Maybe I could experience that, as I was so young and rectless.

Q: Did you have homework in summer vacation?

KHJ: Yes we had, but I thought that it was not important enough. So, I did not do my homework, just enjoying the summer holidays to my heart’s content. One of the homework was to write a diary, but I could not do it everyday. Nowadays we can check daily weather forecast via internet, but it was not possible when I was young. Therefore, I wrote about the weather in the diary, adding “ we had rain “ or “ it was cloudy “ like that later. It is very easy now as we can see an annual weather forecast (laugh)

Q: Now it was decided that you would take a male-lead of the new drama, “City Conquest “ in two years after “Playfull Kiss”.

KHJ: In the drama “Playfull Kiss” and “Boys over Flowers”, I rather showed the image of prince. However, in this new drama, I would be much manly and wild guy, and therefore, I can show you all such as love, pains and anger which only matured people could feel. Please look forward to my new image which is totally different from previous charactors.

Q: What kind of character do you act?

KHJ: Baek Mil with a secret in his birth. He fights against the social ills as antigovernment force. The man who had been spending an ordinary life transformed into a man, determined to get his revenge, struggling with all the social evils.

Q: Are there any action scenes?

KHJ: There are many. Before I came to Japan, I went to so-called Action School. In the drama, there are many top quality action scenes. We also shoot in Japan, but even Japanese people may not be familiar with the shooting location, such as Edo Mura (* Mura means “villedge” ) where you could feel the atmosphere of Edo period ( * Edo period was from 1603 through 1868 ). 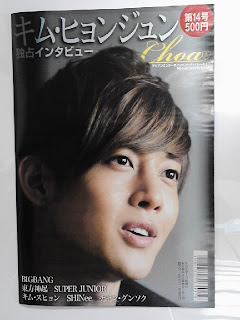