Repost with full credit and link back to the site, Please.

Source: k-plaza.com
English translation: Planethyun.blogspot.com
Repost with full credit and link back to the site, Please. 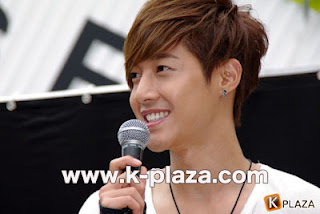 3 Jul 2012 (Wednesday) at Tokyo Odaiba Palette Town, to commemorate the release of his 2nd Single 'HEAT' on the next day, held handshake fanmeeting with fans. 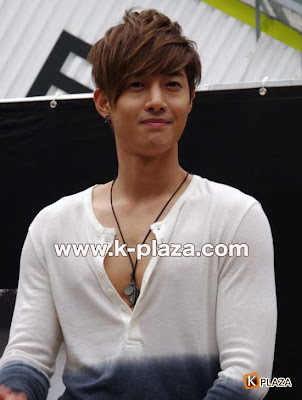 Single 'Heat' is composed by both members of B'z and become a hot topic. Kim HyunJoong who came to Japan for his new song promotion, held a handshake fanmeeting for all of his fans who purchase his album on 4th. Since his solo debut, this is the first time Kim HyunJoong stand face to face infront of his fans, holding a large-scale handshake fanmeeting activity. Although the activity was planned and held impromptu, but one night before there were already around 200 over fans queuing overnight, on this day he had attracted around 5000 over fans gathering at the venue, his CD day sales exceeded 15,000 pieces. 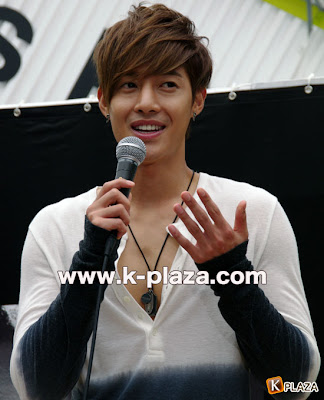 Kim Hyun Joong: I have seen the queuing scene from the hotel, as usual it also rained today. Is it because of my album is going to be released tomorrow so it is raining today? There was an earthquake this morning, was worried of everyone's safety. Although it rained, but it has brought away the heatiness and brought some coolness, seemed like it is not bad. Hope today's activity will be successfully carried out, everybody please be more accommodating. Let us share a happy handshake moment. 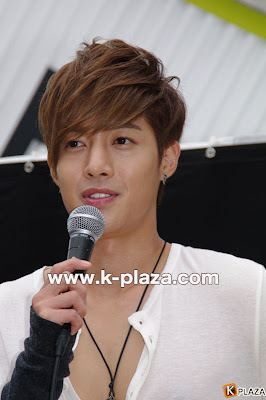 MC: Today is the first time you held such a large scale handshake fanmeeting since your solo debut, how do you feel?
Kim Hyun Joong: Originally I thought it could just be a 100 over people small scale fanhandshake meeting. All the while I am very touched by everybody's love and support towards me, therefore in order to express my heartfelt thankfulness, I have decided to shake hand with every fans who come to the venue. However, I had absolutely not thought that so many people would have come over today. Seems like the handshake meeting today is going to be a long and trivial task. I will tried to use a cheerful attitude, diligently shake hand with each fans sincerely, and persist to the end. 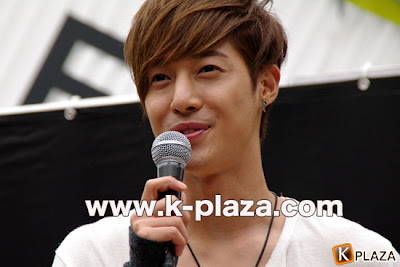 MC: Both members of B'z whom you have admired since long time ago composed song and lyrics for you together, how is it like during the song recording?

Kim Hyun Joong: Both members of B'z had came during the song recording, rather than giving me their opinions and suggestions, they trusted me very much and encouraged me to have an hand on it. It was because of their trust and encouragement, the effect of this new song is very great. Also, was very honored that during recording, Inaba-san even record the consonance part for me impromptu. Just like the meaning of the song title, this album will definitely started off a heat wave. 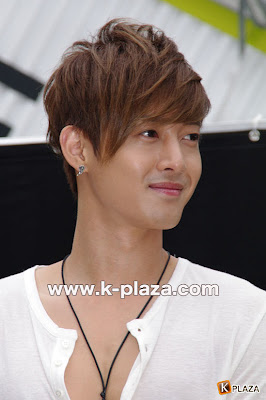 MC: What type of song is 'Let's Party' in the CD?
Kim Hyun Joong: 'Let's Party' has the meaning of 'After partying tonight, we would not go apart anymore!'. You would be able to feel it after watching it personally. This song's production is full of cute atmosphere. The choreography in the middle is very easy to learn for everybody, please definitely must anticipate for it. As for the live performance of 'Let's Party', it is planned to have a guerrilla concert tomorrow, by then everybody will be able to see it personally. (Upon hearing the surprise that HyunJoong had revealed, screams was heard at the venue) Everybody was shocked! I had already revealed this to everybody first, there should be an official announcement to be released this evening. Hope that on tomorrow, everybody will also give me the same great support like today. (Once again screams from everybody) During that time, everybody will be able to see the cute and warm look which I have mentioned, if you want to see it personally, please definitely must go to the live venue! 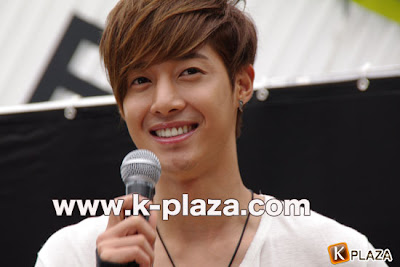 MC: What do you want to say to your Japan fans.
Kim Hyun Joong: Seems like the rain might grow heavier, everybody please take care of your own safety to make the handshake event flow smoothly. Fans who bring umbrella, please help shelter fans who do not bring umbrella. 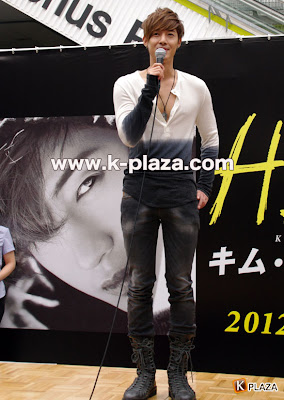 After completed the photo taking with news media, the handshake meeting officially started, it has gradually started to rain, definitely don't fail his 'Rain Man' nickname. Upon Kim HyunJoong personal request, the barrier infront of him was removed, in order to let his fans to have closer and clearer contact with him, his care and concern could be seen from his face, and he shook hand with each of his fan with a cheerful smile. 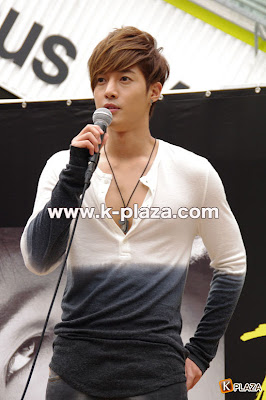 In line with the promotion of his new song, day before yesterday, truck printed with his CD cover photo was seen touring around Tokyo city. Triangle Promotion board was fixed at Shinjuku Laforet cross junction. Promotional banners was hung up in Tokyo Metro line for 2 days.