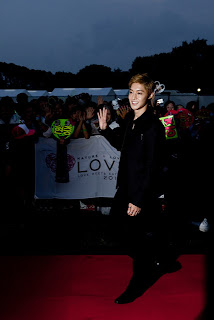 K-Pop gets stronger in japan
By jannica @ dkpopnews.net
Popular girl groups KARA, 4minute, etc performed at a K-Pop event in Japan and showed a spectacular stage, upgrading the Hallyu Wave.
On 30th July, some top Korean idol groups performed in ‘Love-1 Festival 2011′ that was held in Chiba Photo Park. 4minute, KARA, Kim Hyunjoong, MBLAQ, FT Island, The Boss, etc. On the day of the event, all 20,000 audience members showed their excitement despite the rain and other poor conditions.
In this event KARA performed first as the most popular group currently. They showed a wonderful stage with some popular songs of them like ‘Jumping’, ‘Go Go Summer!’, ‘Jet Coaster Love’, etc. They received all the cheers from the audience. The next performance is by Kim Hyunjoong who made a comeback with his solo album. He performed ‘Break Down’, ‘Please’, and ‘Kiss Kiss’, then successfully excited the audience. 4minute performed songs such as ‘WHY’, ‘Heart to Heart’, ‘Mirror Mirror’, etc.
The Boss performed their debut song ‘Love Power’ and their 2nd single ‘Love Bingo!’. MBLAQ performed their Japanese debut song ‘Your Luv’, etc. The other performances by Infinite, ZE:A, Rainbow, Supreme Team, etc also received much excitement from Japanese fans.
Source: Nate
Translating & editing: dianapetrina@4-minute.com
Thanks to kaori. for the tip