Kim Hyun Joong arrived in HCM city on the night of August 10th. Hundreds of fans warmly welcomed him at the airport. At the press conference on next morning, he confessed, "I'm surprised when seeing so many fans waiting for me at the airport. I have to try hard to enter the VIP gate and board my car to the hotel.".
Fans not only gathered at the airport, but they also followed him to the hotel. The following morning, fans came and surrounded him in front of the hotel to take photos. Because of this, Hyun Joong had to enter the press conference 15 minutes late.
Although he rarely smiled and kept cold attitude during the press conf, we had to admit that Kim Hyun Joong is so good-looking. When talking about career, Hyun Joong said he has been carrying activities like acting and singing in Asia countries. However, he is planning to expand his activities to the whole world. He also hope to hold a concert in Viet Nam.
Kim Hyun Joong visited TFS's Vincom outlet, took photos and signed for 30 lucky customers. Thousands of fans also followed and shouted his name, making a big chaotic on the street.
During 2 days in Viet Nam, Kim Hyun Joong introduced news TFS product, had a fan-sign, and held a charity auction with his signed standees to raise fund for disable children. Kim Hyun Joong finished his stay in Viet Nam after meeting with over 3.000 fans on the afternoon of August 12th.

Translated by @HeneciaThailand via http://dolliac.tumblr.com
Repost with full credit and link back to the site, PLEASE.
Kim Hyun Joong feature in Thailand, ASTA Magazine, No. 56 Vol. 5 Sept 2011 Issue 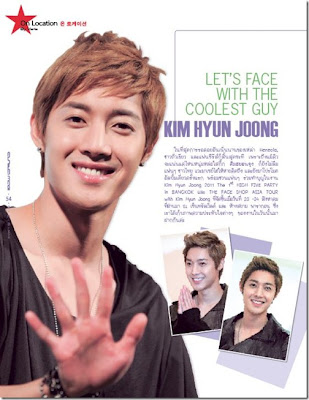 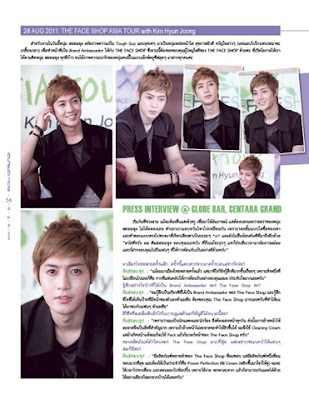 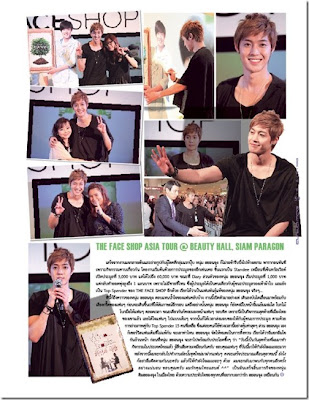 Finally, the wait for Henecians, Green Peas and Series fan is over. Despite a long hiatus, the handsome hunk Kim Hyun Joong never forgets his Thai fans. He stopped by to say hi and to promote his first solo album. The star also invited the fans to join his charity project at “Kim Hyun Joong 2011 the 1st High Five Party in Bangkok” and “The Faceshop Asia Tour with Kim Hyun Joong” during August 23-24 at Central World and Siam Paragon. We have memorable pictures and stories to share with our readers.
23 Aug 2011: Kim Hyun Joong 2011 the 1st High Five Party in Bangkok
Despite his tight travelling schedule, Hyun Joong felt all perked up once seeing the warm welcome from fans. He waited for no time to get on with the interview about his album “Break Down” at Saladaeng Room around 4.30 p.m. The interview was conducted by MC Namwan – Pimara Charoenpakdi.
Baca selengkapnya »
Diposkan oleh Hyunited6686 di Minggu, September 04, 2011

Credit: en.korea.com
Repost with full credit and link back to the site, PLEASE. 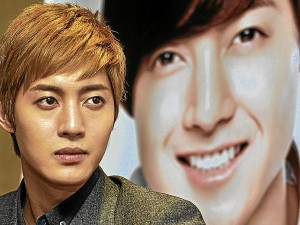 Like most young people his age, Korean pop star Kim Hyun Joong savors the chance to travel the world over as The Face Shop’s brand ambassador. But he’s also the first to admit that traveling for days on end could take its toll on his skin.
“I can’t tell you my favorite Face Shop product because I use a lot,” he said in Korean, through an interpreter. “If ever there’s one, it would be E’thym moisturizer.”
He also emphasized the importance of using sunblock and moisturizer, especially in a tropical country like the Philippines. Even men, he said, are well advised to shield their skin from the sun’s strong and harmful ultraviolet rays.
Fresh-looking
Fresh from a show the night before, Kim faced the media, including a number of bloggers and fans, Friday last week at the Rockwell Club to talk a bit about his career, including his advocacy of helping Abiertas, a temporary home for disadvantaged single mothers.
Baca selengkapnya »
Diposkan oleh Hyunited6686 di Minggu, September 04, 2011

[Translation summary] MC complimented how cute HJ looks and shared stories how fans who tried to get their random luck on Hi5 cried every day when she couldn’t get in﻿ the event. CTW almost exploded when it was flooded with KHJ fans who organized an exclusive, initimate event with fans.

The event included KHJ beloved items including his sneakers and standee auctions. Local fanclub got interviewed in which one of them said “love him, only one, only Joong” The proceeds from the auction would go to Thai Rath Foundation to﻿ build schools in rural needy areas. KHJ also gave out his autographs to fans and took photo with Top spenders.

One fan said “it’s worth it! i got a hug from him!” Another fan said she would put her signed limited edition on a shrine lol. MCs commented jokingly how the hi5 went by so fast&fan even put her car in refinancing in order to get money to follow him. (i think it was a joke) [@HeneciaThailand]
Note: I made a personal payment to obtain these TV clips through a legitimate channel. If you want to repost, please acknowledge the source of the VDO and respect the copyrighted materials.