Credit: kinghyunjoong.com + everhyblue + 4everhyun @ Twitter + 98pati @ Twitter
Repost with full credit, Please.
Thanks to @98pati and @khjean14 for sharing the pictures on Twitter. We miss Hyun Joong a lot, don't we? ^_^ 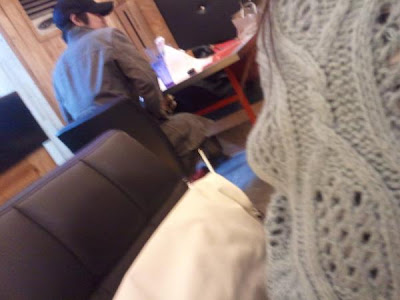 *PLEASE give full credits, and don’t edit or take out anything*

Since this has been requested many times… here’s the second part then.
I previously held back due to our initial agreement not to post, because there were one or two P.S messages that could not be posted publicly. After some editing done, they are taken out so the rest of it is now ready for posting. I took my time too, apologies…
So here’s the second translation of Ahlia’s fan sign fan account and P.S messages from Hyun Joong. ^^
This translation will consist of all eight fansigns that Hyun Joong had for the fans during ‘Lucky’ album promotions in Korea.
As usual, I’m not posting photos of her original scans, but will provide the link instead. You can click the link if you are interested to, erm, observe Hyun Joong’s handwriting? ^^ Since everyone is probably missing Hyun Joong a lot now~ even looking at his handwriting is good enough~
======
‘Lucky’ album fansign #1 & #2: Daegu (2011.10.19) & Ilsan (2011.10.20)
(Link)
The 17th autograph from Hyun Joong~ ♥♥♥
At the next fan sign in Ilsan, I received an additional P.S~^^
(wonderrrgirl: for personal reasons, she has edited away the P.S message so no translations for this particular message either.)
And for the photo of the album below….
It’s the ‘Lucky’ album where I received three autographs and three P.S messages in it.
I searched hard among all the albums I’ve bought and found the lucky number 860660
Even though it is a pity that it’s not 860606…^^;;;;
But still, I showed the numbers to Hyun Joong…
and he gave such a pretty smile~~~ hehehehe
‘Lucky’ album fan sign #3 & #4: Incheon (2011.10.21) & Gangnam 2011.10.23)
(Link)  (Link)
The 20th autograph from Hyun Joong, including a P.S message~♥♥♥
The additional P.S message was received at Gangnam’s fan sign~
(wonderrrgirl: the autograph was received in Incheon, and later Hyun Joong added a P.S message during Gangnam’s fan sign)
"Noona, that promise I’ve made with you, I promise I will keep it. See you next time”
Hyun Joong ah~
A photo of the pinky-hand shake we’ve made have been taken, so I will trust that you will keep that promise(?) ~~ kekekeke
‘Lucky’ album fan sign #5: Busan (2011.10.25)
(Link)
The 21st autograph from Hyun Joong~ ♥♥♥
Hyun Joong pondered for a moment where he should write the P.S message…
Indeed with his unique word spacings…kekekekeke
and wrote a P.S all over UZOOSIN’s face~~kekekeke
”Noona, To go all over the country is very difficult, but hwaiting !!”
(wonderrrgirl: This is with reference to her going for all the fan signs in Korea)
But, Kim Hyun Joong~~
It wasn’t the least bit difficult for me at all~~hee
Rather than thinking the journey to meet you is difficult… my heart was in a flutter and I’m happy~~^^
‘Lucky’ album fan sign #6: Time Square (2011.10.26)
(Link)
22nd autograph from Hyun Joong and P.S~ ♥♥♥
I told Hyun Joong about going to the Busan Hallyu Concert, and how it has been a long time since I went with my friends to Busan to play,
so Hyun Joong wrote the following P.S message~~hehe
“Go to Busan and eat many delicious food there”
‘Lucky’ album fan sign #7: I-Park Mall (2011.10.30)
(Link)
23th autograph from Hyun Joong and P.S ♥♥♥
Before this fan sign, I had a car accident and my car was badly damaged, I wasn’t sure if I need to have it scrapped or not then…
and Hyun Joong wrote a very ‘Hyun Joong’ P.S message~~kekekekekeke
”I hope you win a lottery and get a new car..”
‘Lucky’ album fan sign #8: Daejeon (2011.11.05)
(Link)
24th autograph from Hyun Joong and P.S~ ♥♥♥
Recently, everything has been so difficult and distressing….
and Hyun Joong wrote this P.S message~~
“Noona, I’ll pray for you to not have any difficult times… or distressful times…”
Also, ‘To. Ahlia noona’ was replaced by “Ahlia~♥’~~~hehehe
Me too….
Hyun Joong ah~ ♥♥♥♥♥♥
========== END =========
Ahlia’s writing is so cute and so unlike what I know about her, as a .. hmm.. usually serious and smart lady. But whenever she writes about her encounters with Hyun Joong, the feeling I get is like another side of her that only escapes out whenever Hyun Joong is concerned. ^^
I remembered how she bought the autographs and messages to Singapore for us to see, and I remembered us taking it out again to look at it when I was in her house, talking about it again. She would show me her true blog entries (that were never revealed publicly) with writing as long as mine, and some letters she had given to Hyun Joong that were all archived neatly by her. So while typing out translations for this, I was reminded of those good times again. I wish I can be back in Seoul! ^^
Diposkan oleh Hyunited6686 di Senin, Maret 12, 2012