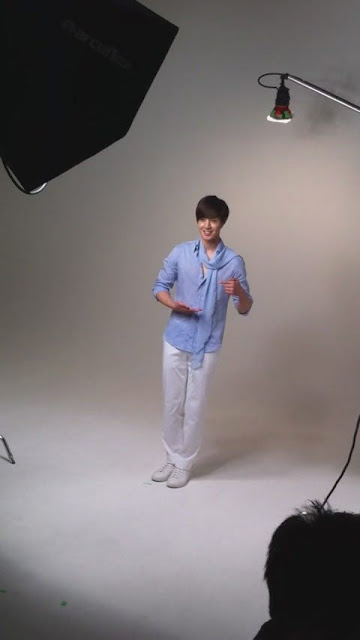 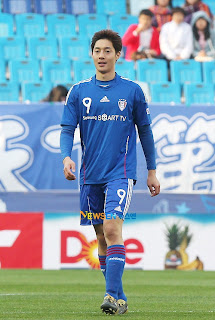 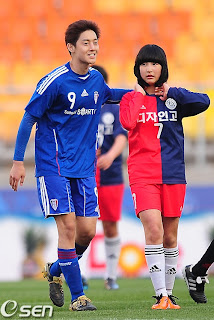 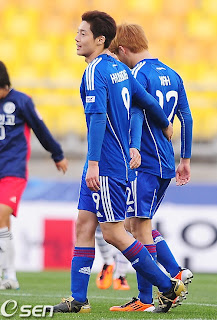 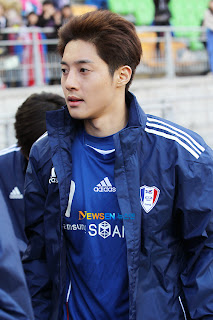 wonderrrgirl : Very very brief... of what was exchanged...

Earlier the interviewer was ask about the yellow card Hyun Joong received and why, HJ said it was because as he was heading the ball he accidentally touch it with his hand.

It's true that he said he's not a pro player yet hahaha. (in reply to anonymous) But this is actually in response to the qns asked by the interviewer, who was asking him about his numerous offsides. ^^

Then they were talking about Park Sung Kwan who is on the same team as him. (I think they're talking about how PSK lost or suffered or sth like that) and the interviewer ask about his feelings with regards to that. He said sth like when they're playing they put in their best and (I think) he said they probably won't feel like crying *HJ laughs*

Then he say that Park Sung Kwan works very hard and has given them a lot of laughter (PSK is a gagman ^^) ask him to smile more and that he can do it. ^^ 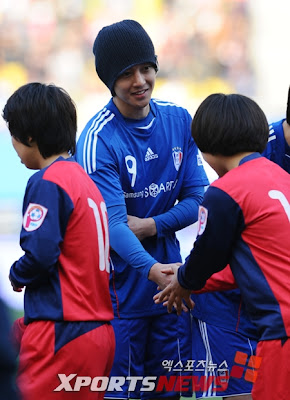 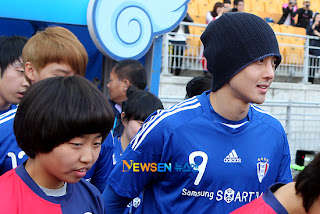 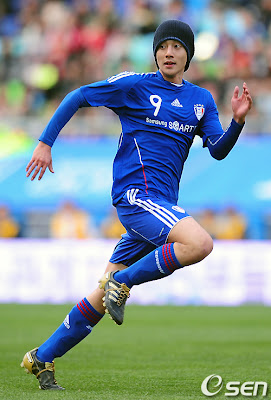 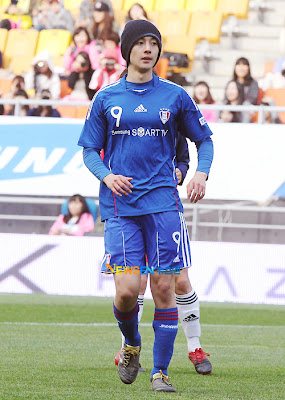 Well, you could watch the Taking a Photo with Papa Hyunjoong scene here, and the time HyunJoong bring Choi WonHong to the field. ^^
Diposkan oleh Hyunited6686 di Minggu, April 24, 2011


小女孩与贤重爸爸的合影是有4步曲….
The 4 steps involved in taking a group photo between little girls and Hyun Joong Papa… 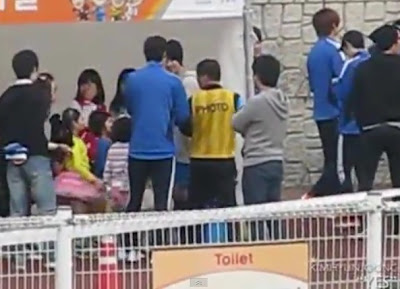 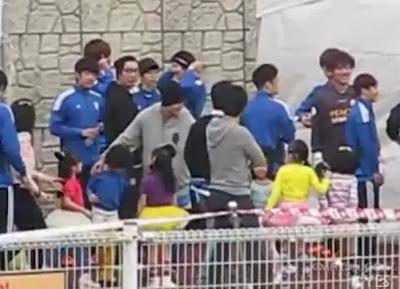 第3步 –
将QQ小朋友聚合一起后，说: 你们乖乖不乱动，爸爸找多几个帅哥和你们拍照，好不好?…
QQ小朋友点点头: 好…
3rd step – After getting the cute kids together, (HJ Papa) said, “Be good, don’t move about, papa will go look for a few more handsome players to take photos together with you, okay?” The cute kids nodded their heads (and said), “Okay…”. 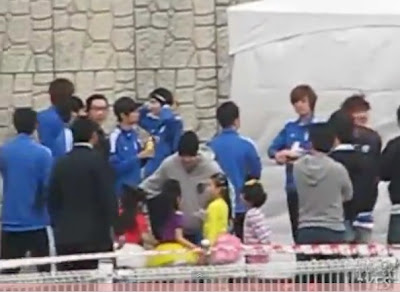 第4步 – QQ小朋友奸计得逞，和多个帅哥加金爸爸合照成功!!!
4th step – The ‘evil scheme’ from the cute kids went as planned, (they) succeeded in taking photos with many handsome players and Kim Papa!!! 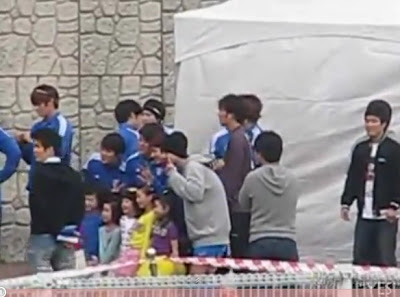 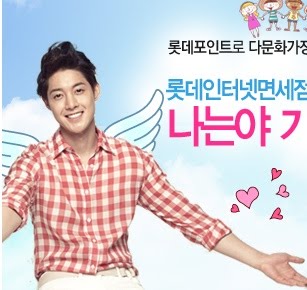 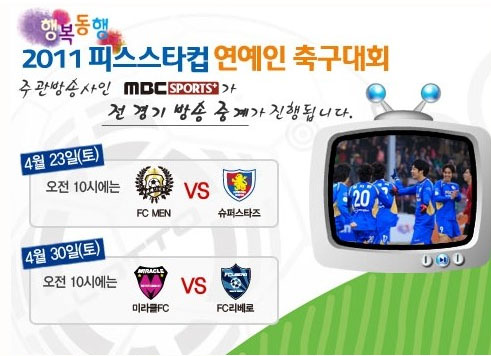 SOCCER IN OUR MINDS : IMAGES OF HYUN JOONG IN ACTION 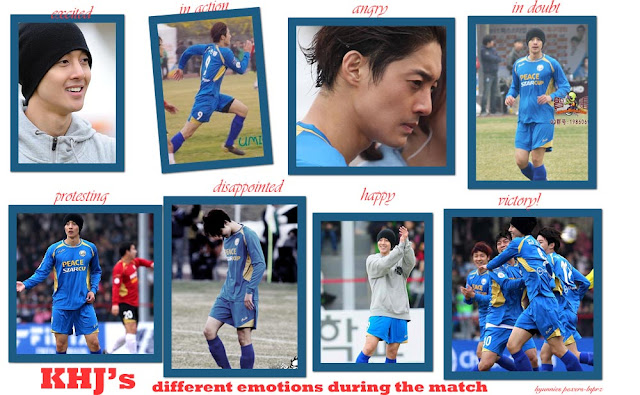 There are images in our minds that gets fixed because they are replayed repeatedly…repeatedly …repeatedly.  The gallery of images in our minds .
We have soccer in our minds and the images of a player in various live action, not poses, frozen by shots taken by the  camera  for all time. Hyun Joong came to us  as if it was only a second away in the past tense thanks to those who have taken the photographs -who have the sharp exacting eyes to shoot the memorable moments.
Many of us were not there-I was not there when Hyun Joong played soccer with his teammates and against the opponent. But the pictures delivered to us made us occupy the best seats in the house.   Then we were  there…I can almost hear the screams of spectators, and my heart would have stopped beating for a second watching Hyun Joong make his calculated moves out of split-second decisions. Run here, run there, the feet almost not touching grounds. Did he turn into an angel whose wings were attached to his heels instead?  How come he could be up in the air as if it was an easy thing to do?
Kick here, kick up there-Hyun Joong showed his flexibility, strength of upper and lower body,  doing short sprints, all these in appropriate  timing. If only I was there…then I would have screamed with the  rest. I would have been on my feet giving him the applause he so deserved.
The camera captured his emotions, his persona-engaged in his world of sport-forgetting the other world he inhabited before. He was truly  immersed that what we now see is no longer the Hyun Joong that played Jihoo, Shillang, Jitjoong guy or Baek Seung Jo. I did not see traces of his being leader of SS501,  either.  He had cast them all aside. He had become Hyun Joong Soccer Player Number 9 .
Hyun Joong a complete athlete, a skilled athlete, oblivious to his surroundings remained focused to the game and how their team played. His facial expressions and his body language spoke soccer. His  verbal communication to his teammates is understood within the context of the game .
Then there were the images of unguarded times when Hyun Joong was carefree and in touched with his inner child, liberated and happy to be whatever he wants to be .
Playing soccer, we saw a natural Hyun Joong, no makeup, perspirations and all, everything in his manly glory for the game. The camera also gave us a natural Hyun Joong momentarily exhausted, pausing to recharge hands on the hips , assessing the situation and then readied to resume attacking once again in the field. These images are now embedded in our heads.  Can we reconcile them with  his  other images when he returns to his other world?
Oh, what a difference a game made to our minds .
Diposkan oleh Hyunited6686 di Minggu, April 24, 2011 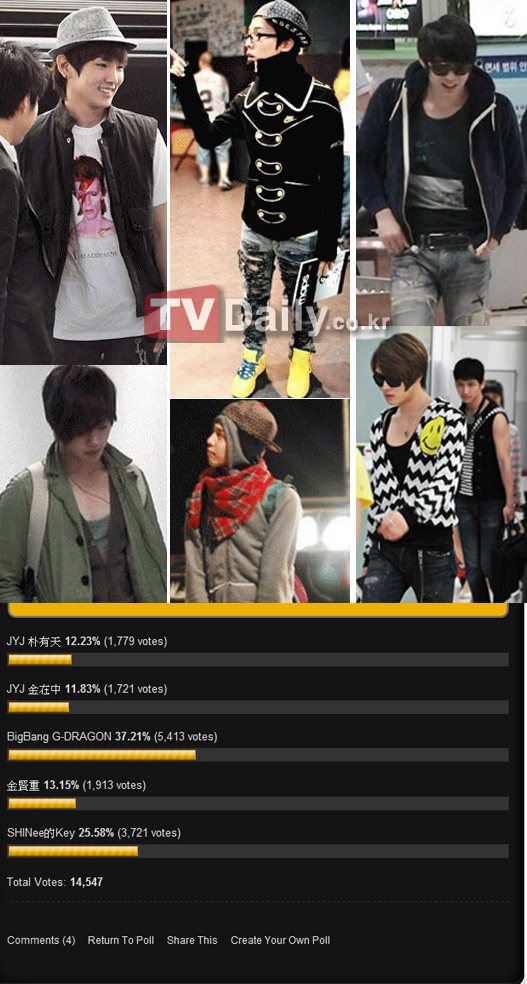 Netizens from China, Taiwan, and Hong Kong conducted a fashion survey about the best Hallyu stars’ style based on airport fashion article released by Korea Star Daily website (www.koreastardaily.com) just recently, the survey successfully gained 14,547 participants voted.
Hallyu star who was crowned to have best fashion style is Big Bang’s G-Dragon who has been known for his unique fashion taste with 37.21% (5,413 votes).
Following behind is SHINEE’s Key at 2nd place with 25.58%, SS501′s Kim Hyun-joong at 3rd place with 13.15%, and JYJ members Park Yoochun (12.23%) and Kim Jaejoong (11.83%) at 4th and 5th position respectively.
Diposkan oleh Hyunited6686 di Minggu, April 24, 2011