Credit: "Korean Pop" Indonesian Magazine
Scans by Hyunited6686
Repost with full credit and link back to the site, Please. 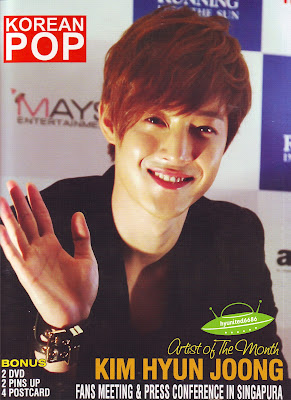 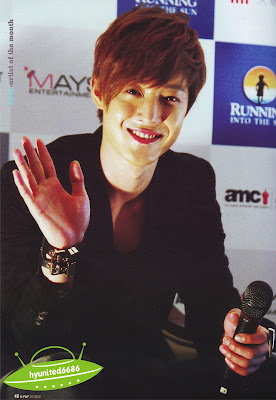 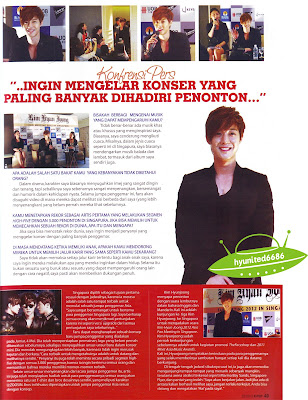 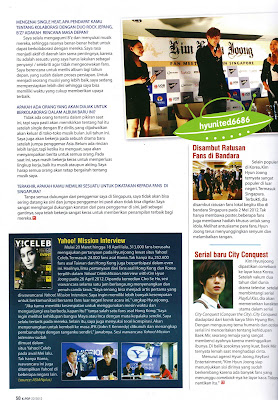 Credit: wonderrrgirl.wordpress.com
Repost with full credit and link back to the site, Please. 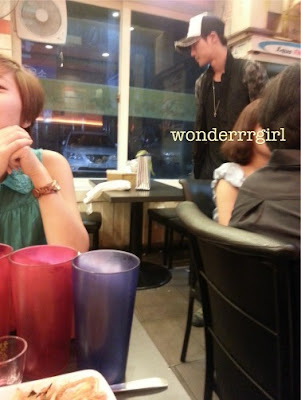 Today has been a lucky day!

Went to Jaksal Seokchon with Chin-i, Naomi and Szewan, because we’re meeting Junzhang and his friend Albert for supper. Junzhang came all the way from Yeosu just to eat Jaksal actually. I also knew Ahlia and the rest will be there, so we said we will meet at Jaksal.

Was eating dinner and watching TV. It’s Mexico VS Korea today. Exciting to watch in Jaksal because everyone hold their breaths and go “OH!!!! AWWWWWWW!!!!!” when the Korean players missed their goal. It was really fun actually! Then it gets late and Hyun Jun (one of the guys working there) came by to give everyone their receipts. I see it as a sign that they are closing the accounts now, so I got up to pay so that they can finish their work earlier too. While paying, Hyun Jun couldn’t figure out how to use the points in my Jaksal card, so he had to call up Junyeon to ask how to do it haha!

While we were both observing and examining the cashier machine, suddenly I felt this tall shadow behind me, so I turned back and came face to face (ok not really. He’s too tall and I’m like only at his shoulder) with a very handsome guy in black and white cap. I startled for a while, before remembering that this handsome face belonged to Kim Hyun Joong. Honestly I didn’t register at first it was him because it’s just too sudden.

I’m sorry to say that I did not greet him because I was in a little shock. Hyun Joong gave a small nod, then he walked past me and went into the kitchen. Hyun Jun (sorry, they have similar names! so confusing) was like smiling to himself, then he asked me, “do you want to go in too? *hahahaha*” -.-;;;; I knew he’s joking though haha. I’ve seen Hyun Jun many many times since last year, and he always joke about stuff since the day I saw him, always faking surprise when I spoke Korean and etc haha.

*Hyun Jun is someone who works there. He is NOT Hyun Joong. Different spelling. Sorry, just have to give this BIG disclaimer because I already anticipate some people will just not read properly haha. Seriously, it happens a lot^^;; *

Anyway here are some pictures… I didn’t know whether to post or not, because this isn’t a public event and I rarely post pictures that isn’t from his public events. But he didn’t look tired or bad, and his eyes are actually bright and refreshed. So I decided to go on with it. 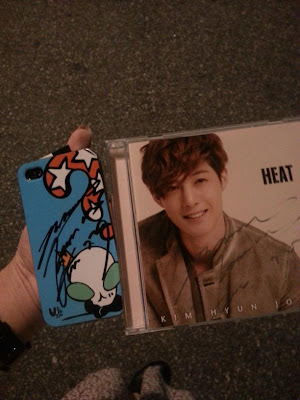 He wore almost all black. There are some plastic bags or something on the table in this picture. He actually walked past and grab them for some reason. I guess he didn’t like that it made the table look untidy, or whatever. (Actually come to think of it, it might be one of the presents from his fans)

He went and sat down at a table near the aircon. There are fans from China, Japan and Korea actually, but only about 10 people in total. It was then when we went up to greet and say hello, before walking out of the shop.

Then Ahlia went to her car and came back with CDs. She lent me one of her HEAT CD so that I could get an autograph too. (Thanks unnie!) Hyun Joong is really nice, he sat down on one of the tables again and said to the fans, “Yeah, give to me, I’ll sign them” in this manly way ^^ 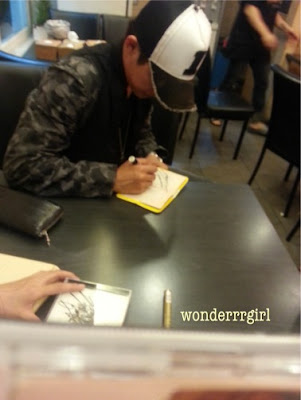 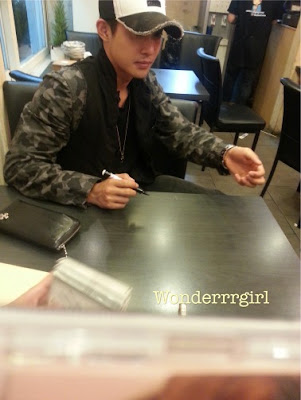 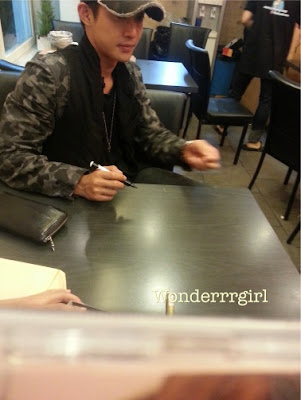 Here’s HJ being nice to the fans, to spare some of his time to sign things for everyone who asked. Actually nobody asked for a signature or anything, but it was clearly in everyone’s head that they wanted to, but feel bad disturbing him. Hyun Joong probably saw it in the eyes of the fans that they didn’t dare to disturb him, so he himself sat down, and gestured graciously that he will sign things.

He doesn’t look very tired even though he just reached Korea not long ago at 5 something in the evening. Hyun Joong signed a number of stuff until it is time for him to leave too, so he apologetically put up his hands to make a cross sign and bow his head a little. Everyone was well behaved and nobody screamed or anything. Everyone just said bye and make way for him. I was already by then with my friends. When he came out, I said bye and he bowed (or nod his head) again.

My friends are super funny because they didn’t recognize him until I told them that it’s him. And everyone keep saying I’m very happy. I think they’re damn lucky too! They’re not even fans! And Junzhang really wanted to come to Jaksal for the food too. I’m so glad he chose today to come back! Actually, I would still be in Jaksal even if he isn’t coming since Ahlia already told me to come that day to join them. But still…. Junzhang, Chin-i, Szewan, Naomi and Albert you guys are all my lucky stars yay! They just randomly saw HJ in Jaksal yet aren’t fans! Sigh this kind of luck always happen to people who aren’t fans -.-

Anyway my friends commented that HJ looked good in person, though darker than they thought. Sze wan said he looked so shy and quiet when the fans talked to him, and she is surprised. They’re all surprised how shy he is. To us this is actually just the normal HJ, but in their minds, their idea of a celebrity is someone who waves to fans and all haha. (Except for Junzhang, none of them are into Korea and none of them are into KPOP, and they’re really just here for summer exchange, so they have no idea how korean celebrities behave)
—-
As for me, tonight has been quite a surprise even for me. I didn’t think I’ll care or bother about being a HJ fan anymore because I haven’t been active for a while. I wanted to focus on other things so I gradually just moved away, plus I was so tired being asked questions and answering questions and arranging things for people and stuff, so I took a step back. I also didn’t feel that excited when I see HJ perform.

But when HJ appeared behind me just now, I was really surprised with how my heart jumped and how my hands shook with suppressed excitement that he’s here. I guess seeing HJ in Jaksal really BEATS seeing him anywhere else in a way, but mostly I’m surprised how he still had an effect on me. I guess deep down inside, no matter where I go or what happens, a part of me will always feel for Hyun Joong after all. No matter how many times I see him and how tired I feel being a fan, Hyun Joong will always have a place, however minor, in my heart.

Thanks for coming down! ^^ I thought I’ll only see him tomorrow on the plane, so this is really a pleasant gift!

I’ll enjoy myself in Bangkok for his fan meet, and hopefully I’ll continue to hold on to this fluttering in my heart that I have forgotten about so long. Thank you HJ, for bringing it back to me one day before I go to Bangkok to watch your performance. I think I will really treasure this last FM and enjoy it even more now! 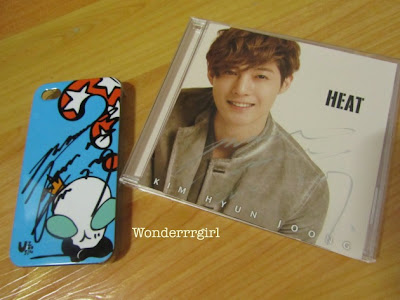 P.S An add-on: I forgot to mention that just now when he signed my phone case, I got it back from him and I dropped the phone on the floor. Cannot help but let out a little gasp. Hyun Joong reached down to help me get it, but I was much faster (I should have been slower haha! But I didn’t think that much at that time except to grab my precious phone case). ^^;;;;;
Diposkan oleh Hyunited6686 di Jumat, Juli 27, 2012