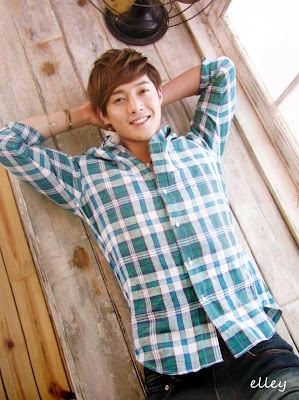 Associated Acts : SS501 (2005 - Present)
In 2008 starred in MBC variety show, “We got married”; 2009 Korean Drama Boys Over Flowers (South Korean version of “Meteor Garden”) as Yoon Ji-Hoo, 2010 Korean Drama "Playful Kiss" as Baek Seung Jo.
Career
Kim Hyun-joong (Hangul: 김현중; Hanja: 金賢重) was born on June 6, 1986. He is a South Korean entertainer and the leader, main rapper and Leader of boyband SS501. Kim is well known for his role as Yoon Ji-hoo in the 2009 Korean drama Boys Over Flowers, for which he received the "Best Actor Award" at the Seoul International Drama Awards 2009 and the "Popularity Award" at the 45th PaekSang Arts Awards. In 2010, Kim played a role as Baek Seung Jo in a Korean drama "Playful Kiss". In 2011, Kim debuted as a solo artist with his Korean mini albums Break Down and Lucky. He is a style icon in Korea, having won several icon awards. Kim is also a member of the charity football team FC MEN.

Kim Hyun-joong dropped out of school when he decided to become a singer. During his school days, he played bass guitar in a band. During 2001 and 2002, while working as a waiter in a family restaurant located at Jamsil-dong, Kim was introduced to a new set up management company CEO. Initially he was to debut in a five-member group, of which Han Yeon of B2Y (now disbanded) was to be the leader and Kim the maknae (youngest member). While the group underwent training together, they were asked by their company to debut in China as a Hallyu project group, but they rejected the offer and disbanded. Kim proceeded to audition for DSP Media (formerly DSP Entertainment) and became a member and the leader of SS501. After SS501's debut, Kim returned to school and graduated in 2006.

On June 8, 2005, Kim made his entertainment debut as the leader of SS501. The group earned popularity as they won many rookie awards. SS501 appeared on the 2006 show Thank You For Waking Me Up, which proved him to be a heavy sleeper, and, one year later, on Mnet's Idol World, which showed SS501 doing various activities in Japan.

In May 2008, Kim joined the cast of We Got Married along with Hwangbo in episode 9. Known as the "Lettuce Couple", they won MBC's "Best Couple Award". The couple made their official exit from the show in episode 38, on December 14, 2008 due to scheduling conflicts with Boys Over Flowers.
In the hit drama series, Boys Over Flowers, he plays Yoon Ji Hoo. The series was a huge media and ratings sensation in Korea during its run from January to March 2009, garnering a huge amount of popularity for the entertainer.
Along with his bandmates, Kim is preparing SS501′s new Korean album, for which each member will be doing a solo. Their Asia Concert Tour began in mid-August 2009.

While working in Japan in 2008, Kim was cast as Yoon Ji-hoo in the Korean drama Boys Over Flowers, a role for which he won the "Best Actor Award" at the Seoul International Drama Awards 2009 and the "Popularity Award" at the 45th PaekSang Arts Awards. Because of his drama work, Kim, along with his bandmate Park Jung-min, who starred in a musical at the time, were absent for SS501's U R Man album, which the three remaining SS501 members promoted by themselves, with the exception of some special performances that included all five band members.

In 2009, SS501 released their album SS501 Collection mostly consisting of solo songs by the members, for whose promotion SS501 released a mini drama music video, in which Kim was one of the main characters.

In mid-August 2009, the band started their Asia Concert Tour at the Olympic Park, Seoul. They continued their tour in Shanghai, Taipei and Bangkok before returning to Seoul for a closing encore concert. SS501 staged two concerts for the encore closure on February 27 and 28, 2010 respectively.


In September 2009, during promotional activities in Yokohama, Japan for Boys Over Flowers, Kim was diagnosed with H1N1. He was treated in a Toyko hospital and was discharged on September 15, 2009. While recovering from H1N1, he could not attend the Seoul International Drama Awards; his SS501 band mates, Heo Young-saeng, Kim Kyu-jong and Kim Hyung-jun accepted the award on his behalf.

In April 2010, Kim appeared in Gummy's music video for "As a Man" (Korean: 남자라서) opposite Jung Ryeo-won.

In June 2010, SS501 released their last album entitled Destination, produced by Steven Lee. Its title song "Love Ya" was well received, rating high in record sales and online music stores, and topped Music Bank's K-Chart. Due to their ending contract with DSP Media, however, the group ended promotions after only two weeks.


On June 19, 2010, Kim appeared at a concert in the Philippines alongside BEAST.


On June 28, 2010, it was announced that Kim had officially left DSP Media and joined Bae Yong-joon's KeyEast Entertainment company. Although Kim had left DSP Media, he stated, that SS501's activities will be top priority in the members' contracts and that the group has not disbanded. Later, Kim explained in an interview that, at the time, no company was financially able to sign all five members, thus the group decided to take the chance to focus on their solo activities.


Kim played the leading role of Baek Seung-jo in the drama Playful Kiss, a Korean adaptation of the Japanese shōjo manga Itazura na Kiss. Baek Seung-jo is an all around perfect genius with an IQ of 200, who ends up falling in love with Oh Ha-ni, played by Jung So-min. Because of the drama's success in Korea, Playful Kiss was broadcast in China and on November 7, its leading male actor, Kim, was interviewed by CNN's Anna Coren.


Kim was invited to perform "Sunshine Again" with other four other singers from Chinese-speaking countries, at the 2010 Asian Games in Guangzhou as the representative of South Korea.


In early December 2010, Kim went to Singapore and Malaysia to promote The Face Shop.

In May, Kim named his official solo fanclub Henecia, which is a combination of "H" (as in Hyun-joong) and "benecia", which derives from Latin and means "blessed".

On June 7, 2011, Kim released his solo debut mini album, Break Down. It was produced by Steven Lee, who had composed SS501's hits, "Love Like This" and "Love Ya". The title track "Break Down" features Double K. and is a high energy dance track. "Please" is the R&B heavy second lead track. The album exceeded 70,000 pre-ordered copies in just 10 days. It peaked at number one on Gaon Weekly Album Chart for the week starting June 5, 2011 and was the best-selling album for June on Gaon Monthly Album Chart with 100,433 copies sold. It also topped the Japanese Oricon chart in the International Imported Album category for the first week of July. "Break Down" was the first place winner for two consecutive weeks on Mnet's M! Countdown music show (June 16 and 23, 2011) and as well as on KBS's Music Bank. Break Down is certified platinum in Taiwan, due to which Warner Music Taiwan CEO Chen Ze Shan handed Kim a platinum record in a press conference held in Taiwan. As far as Kim's popularity in Taiwan is concerned, he was the first Korean to appear on Taiwanese TV show The Person.


In July 2011, Kim held the first of his nationwide concerts in Japan. The tour continued from November in seven cities across Japan: Sapporo, Sendai, Hiroshima, Yokohama, Nagoya, Tokyo and Fukuoka.


On October 11, 2011, Kim released his second mini album Lucky. It debuted at number 5 on Billboard's World Chart  and topped the Gaon Chart again for the third week of October 2011 and was the highest selling album on the Hanteo Album Sales Chart for the month of October.


On October 25, 2011, Kim, together with Seohyun, released a digital single entitled "The Magic of Yellow Ribbon", which is the theme song for a commercial for The Face Shop. On 28 October, he, along with Ha Ji Won, acted as MC at the 2011 K-Pop Super Concert held at Gwangalli Beach in Busan, which was broadcast on SBS on November 6.


In November 2011, Kim won the 2011 KIA Soul People’s Choice "Style Icon Award" for the third consecutive year. On November 9, Kim announced at a press conference for his Japan Tour that he had signed a deal with Universal Music Japan for his Japan-based music activities. Kim successfully completed his Japan Tour that had started on November 9, attracting over 30,000 fans. At the 2011 Mnet Asian Music Awards, which were held in Singapore, Kim won the award for "Best Male Solo Artist".


On 15 December 2011, Kim released his digital single Marry You / Marry Me, which consists of "Marry Me" and Marry You" as well as instrumental versions of them. Music videos for both songs were released on his official YouTube channel the same day.

On January 25, 2012, Kim released his first Japanese single Kiss Kiss / Lucky Guy, which consists of Japanese versions of songs from his two Korean mini albums and one original Japanese song.


The singer, who had mostly focused on promoting his albums after his second drama Playful Kiss had come to an end in 2010, was cast for the upcoming drama City Conquest, which will air in late 2012 / early 2013. Kim Hyun-joong will portray the main character of Baek Mir in City Conquest, a wild and strong man, who experienced many hardships and difficulties throughout his life, e.g. growing up without his parents. Baek Mir ends up taking revenge against the evils of society which had destroyed his family. The drama is an adaptation from the original comic by author Shin Hyung Bin.


Only a few days before filming for City Conquest began in Japan, Kim released his second Japanese single Heat on July 4. Along with its lead track "Heat", the single album also includes "Let's Party".


On October 4, 2012, Kim announced at an event to promote City Conquest and to celebrate his Japanese fanclub Henecia Japan's first anniversary, that he would release his first full length studio album in Japan in December. One day later, Universal Music Japan released further information via Kim Hyun-joong's Japanese website including the album's title Unlimited and a still incomplete track listing.