To all students taking the college entrance exam, good luck! 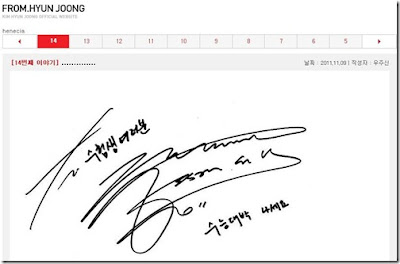 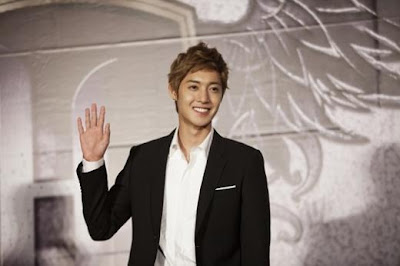 Kim Hyun Joong recorded the highest album sales in 2011 by a solo artist.
On November 9th, Hanteo Chart has has revealed the results for the ‘Hanteo Award’ which is based on albums released from January 1st 2011 through November 7th 2011. Kim Hyun Joong has sold over 200,000 copies with just 2 solo albums released and the results place Kim Hyung Joong on the 1st place for solo artists and 3rd place overall which is an amazing outcome. 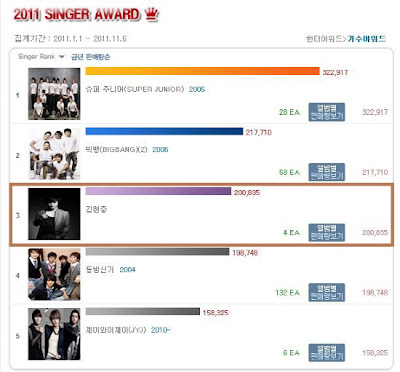 Hanteo Chart bases its numbers on all sales data from the road shops adhering to Hanteo Chart in Korea, as well as major music shopping malls and small and medium size internet sites in adherence with Hanteo Charts.
Within the flood of idol groups, Kim Hyun Joong’s numbers are undeniable. Kim Hyung Joog has sold 110,000 copies of his first mini album of the year ‘Break Down’ in June to kick off his solo promotions then with the 2nd mini album ‘Lucky’ has also recorded 100,000 copies sold within just 3 weeks of release. The number is, in fact, the top number for solo artists.
Kim Hyung Joong has earned the honorable title of a solo artist who has sold over 200,000+ just within Korea with 2 mini albums bested only by idol groups like Super Junior or Big Bang.
Kim Hyun Joong is currently actively promoting his title song ‘Lucky Guy’ from the 2nd mini album and is preparing for a 15 day tour of 8 cities in Japan in November, namely Tokyo, Osaka, Sapporo, Sendai, Hiroshima, Yokohama, Nagoya, and Fukuoka
Diposkan oleh Hyunited6686 di Rabu, November 09, 2011 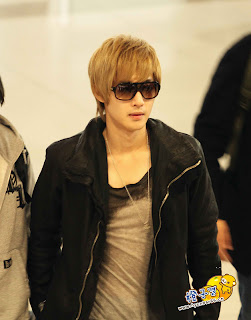 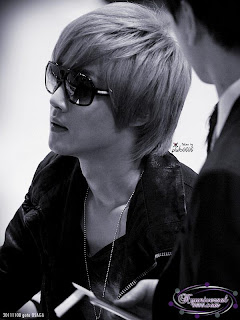 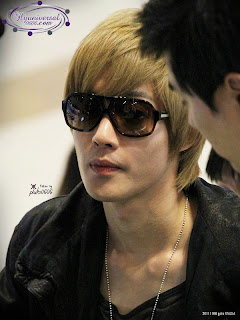 If hallyu is the love for all things Korean, then Kim Hyun-Joong is the undisputed prince of this Korean wave. As the former leader of boy band SS501 (he’s now singing solo) and actor in the beloved Korean dramas Boys Over Flowers and Playful Kiss, KHJ is a pop-culture phenomenon — a standout in a country where it’s tough to stand out, considering that South Koreans are some of the most style- and beauty-conscious people in the world. The plastic surgeons here are reportedly the best in Asia, and many young Koreans — even those who aren’t in show business — will go for tweaks to their noses, eyes or cheekbones without suffering the same stigma they might get in other parts of the world.
“The attitude is, ‘I’m doing it to look more beautiful and if I can be the most beautiful I can be, what’s wrong with it?’” says Diane Lee, overseas marketing associate of The Face Shop’s overseas business department.
Not surprisingly, cosmetics are also big business, and The Face Shop, having gone global and offering a wide array of natural skincare products to address every need, is the best-known and most trusted Korean brand. As their endorser since last year, Kim Hyun-Joong has traveled throughout Asia, thrilling fans while talking up the brand. (He left yesterday to tour Japan.)
Today we’re catching up to him during a rare break in his schedule. Wearing a black suit perfectly tailored to his six-foot frame, his light brown hair styled into a piecey coif, the three-time winner of Korea’s style icon awards offers a friendly handshake. He seems a bit tired but game, answering questions with a wicked sense of humor that unfortunately seems to get a little lost in translation. On the table are a few of what we assume are his favorite Face Shop things: the Power Perfection BB Cream, a triple-action cosmetic that whitens, fights wrinkles and acts as a sunscreen (it can also be used as foundation); and the E’thym O2 Water skincare line, which includes a Balancing Toner, Recharging Essence, Moisture Lotion and Aura Wave cream. Barring a tiny scar under his eye, KHJ’s complexion is flawless thanks to these products.
Baca selengkapnya »
Diposkan oleh Hyunited6686 di Rabu, November 09, 2011