Translated by: OnlyKHJtimes (@OnlyKHJtimes/http://onlykhjtimes.blogspot.com)
[Note: All reposts must be with full credit + link back to site] 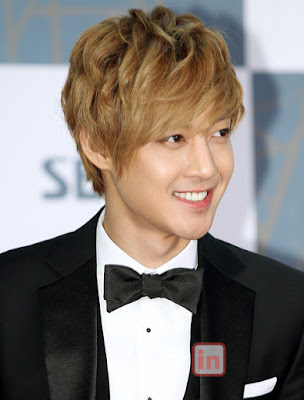 It was reported that hallyu star Kim Hyun Joong has great love for his fans.
Kim Hyun Joong will hold the first fan meeting of the new year on Jan 21.
This fan-meet will be ticketed but the admission ticket is only priced at 20,000 won.
If it was a small fan meeting, the admission could be free. However, Kim Hyun Joong's fan meeting will be held at the Jamsil Indoor Stadium, which is a  large scale venue and can hold more than 7,000 people.
Besides, unlike the usual talk-show style fan-meet, Kim Hyun Joong will sing more than 10 songs, including 'Break Down' from his 1st mini  album and the songs from the 2nd mini ablum, 'Lucky', at this fan meeting.  It is virtually the same as his solo concert.
Other Korean singers who hold concerts at the Jamsil Indoor Stadium charge admission fees from between 50,000 won and 90,000 won. However the admission fee for Kim Hyun Joong's fan meeting is just 20,000 won and is less than half charged by other singers; the fan meeting is expected to rake in no profit at best, or even make a loss.
Kang In Suk, the director of music enterprise department of Kim's agency, Keyeast, explained that the fan meeting is virtually the same as a small-scale solo concert, but it was brought forward at Kim Hyun Joong's request. It will be a fan service and one that almost makes no money.
This fan meeting was abruptly decided to be held. The fan meeting for  Korean fans was arranged as the first schedule (activity) of 2012 because Kim Hyun Joong didn't want to make his Korean fans disappointed by his new year's promotion in Japan.
Kim Hyun Joong's love for his fans is more than just this. One company suggested large amounts of money to promote its product at his fan meeting, but it was refused. The director Kang said it was because Kim  Hyun Joong insisted he could not possibly make his fans spend their money for his own interests.
Kim Hyun Joong has been famous as an idol singer with his unique manners and opinions since he started as a member of SS501. Kim Hyun Joong never lost his own unique colour of character and it shows in his great love for fans who (are believed by Kim to) make him the person he is today.
Director Kang praised Kim Hyun Joong and said that from the point of view of the agency, which needs to pursue practical interests, it would leave much to be desired, but as a 'man', he is great.
Meanwhile, it has been reported that Kim Hyun Joong secretly donated $100,000 to the Red Cross and an organization that passes out briquettes. Compared to other celebrities who would use the small amount of donation as a massive self-promotion, Kim Hyun Joong's step is admirable.
As for the head of Kim's agency and the father of Hallyu star, Bae Yong Joon, Kim Hyun Joong's actions is probably going to make Bae tear up for making the agency spend money for Kim's fans.
Diposkan oleh Hyunited6686 di Jumat, Desember 30, 2011 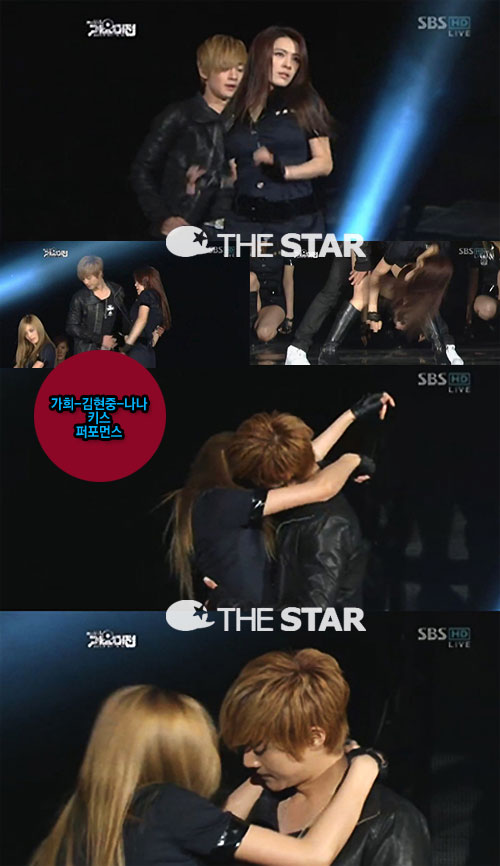 news on allkpop
Kim Hyun Joong‘s provocative performance with the girls of After School is causing quite the stir among netizens.

Singer Kim Hyun Joong put on a special performance at the 2011 SBS Gayo Daejun that took place at the KINTEX in Ilsan on December 29th.
Everyone held their breath as Kim Hyun Joong caressed After School leader Kahi‘s long legs and pulled her in for what seemed would be a kiss.
He then immediately turned to his right and wrapped his arms around Nana‘s waist and leaned his face in towards hers, which drove the fans wild.
The event was hosted by Lee Seung Gi, Song Ji Hyo, along with Girls’ Generation member Yoona, and artists such as B2ST, 2PM, Wonder Girls, KARA, Super Junior, Girls’ Generation, TVXQ, and more put on various never-before seen performances.
Audience members could not look away for even a moment, as the 2011 SBS Gayo Dajun was chock-full of performances including ballad stages, a sexy performance of the top idol divas, and a fierce dance battle between the idol boys. 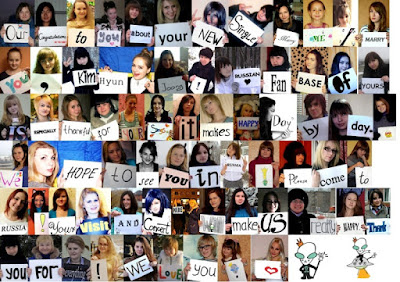 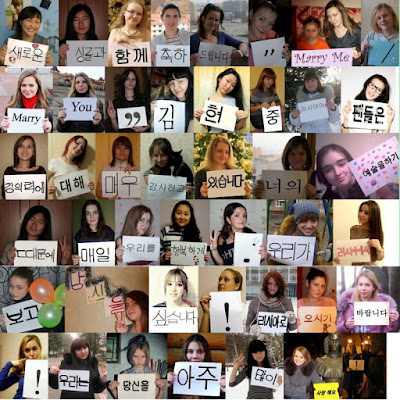