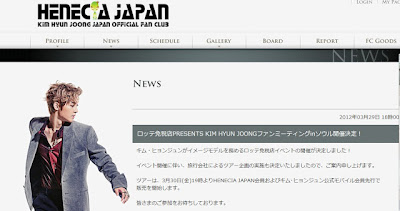 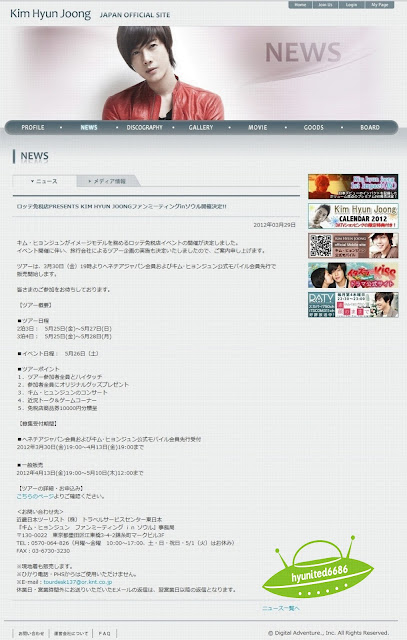 The details of the real tour will be publish soon.

Credit and wrote by LazerKim

Note from Hyunited6686:
We're not put LazerKim writings here to start another fanwar among KHJ fans. If you don't like what you read, we always provide the complete source and you can always click the link straight to her own blog there ^^ Remember, having different opinion doesn't make you enemies... we can always talk and have a 'healthy' discussion about anything (as long as we willing to accept other's opinions). for now.. enjoy your reading! ^^
Kim Hyun Joong… [article] FAN STARTER
By LazerKim:
Are you looking for something to read about Kim Hyun Joong? Are you a new fan of Hyun Joong? Or do you just happen to pass by to fill up your curiosity as to who Kim Hyun Joong is? Well, today is your lucky day since you came into the right place, Kim Hyun Joong is my sole interest in writing articles. If you’re a new fan, I would assume you have met him when he debuted his album Breakdown.  Or you might have seen him from his latest public exposure from his video clips. Probably you might have heard about Kim Hyun Joong but didn’t have much chance in getting to know him better. Well, it’s high time to start, and here’s your chance to do so.
For a briefer, Kim Hyun Joong was a leader of a boy group SS501 consisting of five members of singer dancers debuted in 2005. In June 2010 the group’s contract under DSP was terminated and Hyun Joong moved in to KeyEast as a solo artist right after his contract termination. Hyun Joong started to gained attention in 2009 when he did a huge hit drama Boys Over Flower both in Korea and overseas. In 2010 Hyun Joong did another drama Playful Kiss which suffered low rating in Korea but did a smashed hit overseas.
June – December 2011
In June 2011 Hyun Joong debuted his album Breakdown which hit the top of the billboard count down in any music chart. Being the official endorser of The Face Shop and launching of his album Breakdown Hyun Joong traveled in many parts of Asia. In October 2011 Hyun Joong again released another album Lucky Guy, again gaining a lot of attention. After his 2 weeks promotion of Lucky Guy, he immediately flew to Japan to host seven concert events in seven cities of Japan. Towards the year 2011 ends Hyun, Joong was able to received eight trophies for Best Male Artist  in different prestigious Awards.
January – Febuary 2012
By the start of 2012 in January, Hyun joong hosted a fan meeting in Seoul as his way of thanking his fans for a successful year 2011. The following day He flew to Japan to debut his Japanese version album of Kiss Kiss/Lucky Guy in January 25, 2012. The album marked in the history of Japanese music industry to be the first foreign artist to attain over 70,000 album copies sales on its first day release. Hyun Joong became an international news maker as he became the cover center page of every magazines and newspapers in all parts of the world while he was in Japan.
Hyun Joong hosted his first concert for year 2012 at Yokohama Arena in Feb. 5, which was attended by over 20,000 fans not to mention those who were not able to make it since concert ticket were all sold out a week prior to Hyun Joong’s arrival to Japan. The scenario did not end from here, Hyun joong came back home to Korea and had gained Gold status for his first album having able to attain over 100,000 album copies in revenue for barely one week since its release. And at present Hyun Joong is at his hiding cocoon!!
From 2009 Hyun Joong’s popularity boost continued to snowball up to this time. Every time he’s out there on his public appearances, the more he gained attention. I’m sorry to give you a long litany of briefer, but actually this is already a summary of his success which transpired in barely eight months. From the time Hyun Joong performed his come back stage in June 2011, he never stop and so with his fans were so busy with updates about his activities.
Baca selengkapnya »
Diposkan oleh Hyunited6686 di Kamis, Maret 29, 2012 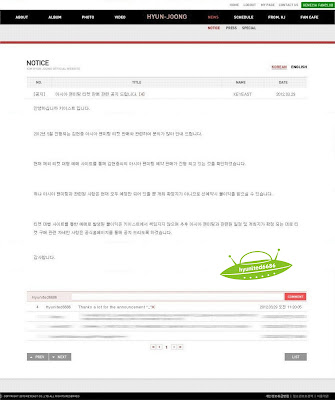 With regards to the fan meet, here’s what KEYEAST have to say. Actually, I don’t know how many times KEYEAST have to say something like this. As long as it did not come from KEYEAST, nothing you hear is official, no matter where it came from, and nothing is confirmed until the official schedules are out.


In order to prevent fans from receiving the wrong information, and therefore being placed in a disadvantageous situation, perhaps this also should be another call for everyone not to post/disseminate/spread any unconfirmed rumors or news. If you must do so, please indicate clearly that it is ‘UNCONFIRMED’ or a ‘RUMOR’.


That way, we can ensure that no Henecian is being led on by any unconfirmed rumors or news with regards to Hyun Joong. Let’s try to make it easier and anxiety-free for every fan to support Hyun Joong.

This notice came as a result of the many enquiries made about Kim Hyun Joong’s 2012 Asia fan meet.
We will now address the concerns with regards to the current overseas ticketing for the Asia tour via the website.
At this moment , all plans with regards to the Asia fan meeting is in the midst of planning and is not yet confirmed or finalized. As a result, any advance booking of tickets may put one in a disadvantageous situation.
Keyeast is not responsible for the unofficial ticketing through the website, nor the disadvantageous position any fan may be placed in as a result of it. When the plans for the Asia Fanmeet are confirmed, Keyeast will release an official notice with detailed information via the official website.