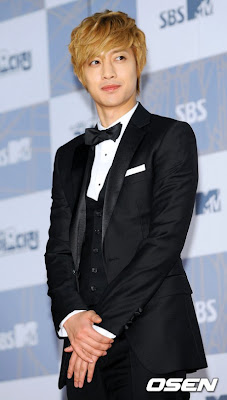 Singer Kim Hyun Joong held a live concert at the Yokohama Arena on February 5th to celebrate his Japanese debut.
At the concert hall, Kim Hyun Joong faced the 20,000+ audience members and remarked, “My Japanese debut song, “Lucky Guy“, has sold over 100,000 copies in the first week after its release. Thank you guys for showing me so much support, even though I’m just a rookie here.”
“It’s unfortunate that I wasn’t able to meet all 60,000 fans who applied to be here tonight, but I will make sure to have a good time with all 20,000 of you,” he said with a laugh.
Kim Hyun Joong also donated the profits from the concert to an orphanage in Japan. “I hope that it will be able to offer some help,” he said. “And if any of you are able to do so, please do what you can to help the children.”
The singer performed 13 songs in total, such as “Lucky Guy“, “Let Me Go“, “Breakdown“, and “One More Time“.
Kim Hyun Joong released his debut Japanese album on January 25th, which quickly climbed to #3 on the Oricon charts as well as setting a new record for most number of sales by an overseas artist.
Diposkan oleh Hyunited6686 di Selasa, Februari 07, 2012