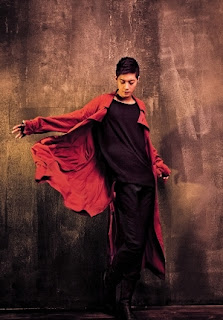 ﻿Kim HyunJoong's first mini album will be on sale simultaneously in all asian regions like Korea, China, Japan, Taiwan, Hongkong, Thailand, Singapore etc.
Kim Hyunjoong's agency KEYEAST revealed through a paper report on May 26, "Concern and anticipation over Kim Hyunjoong's comeback in the music industry across domestically and internationally is extremely feverish and so we've thus decided to release his album simultaneously in all asian regions", "In order to produce the best completion piece of album, we're focusing on the final preparations for now. We ask for all your anticipation", as they showed their strong confidence for this album.
Title song 'Break Down' is a song with strong beat and sound to it, bringing out a very powerful performance piece which allures anticipation. With Kim Hyunjoong's melancholic yet charismatic vocals, he has had brought up the song quality with a notch through the powerful composition of the song itself.
Besides that, with almost a year close of preparation, other songs in this album like 'Intro (Let Me Go)', '제발 (Please)', 'Kiss Kiss', 'Yes I Will' etc which contain unique shades of Kim Hyunjoong that was never before seen will be delivered through the music world and performance stages of his only.
Especially in order to produce this album, Kim Hyunjoong specially flew down to America and prepared for some work and also had the honour to invite famous artists to participate in the song compositions and choreographies. About more than 200 million won was invested to shoot the music video. From these all, we could see how much effort was put in to produce an album with high completion, which was what is indeed the case as was heard.
Again, personnel from the agency also divulged, "Having been receiving much popularity in Asia, concern for Kim Hyunjoong's album has been feverish even before its release, and by now, we've already been receiving an influx of invitations for overseas concerts and promotions in countries".
With June 7's showcase at Jangchung Gymnastic Stadium that can hold 4,000 fans as the start, Kim Hyunjoong's first mini album 'Break Down' has since begun its pre-order on last 20th (May) on offline and online stores. It will be expected for simultaneous release in all asian regions beginning June 8. 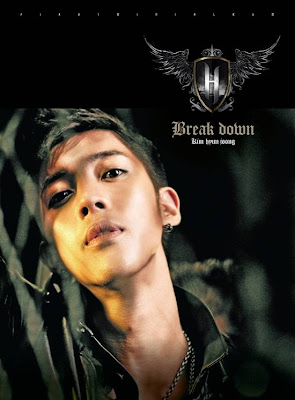 After releasing his music video for “Please” yesterday, SS501′s Kim Hyun Joong followed up with some album jacket photos for his first solo album, “Break Down“!
T﻿he singer/actor is known for his smooth look, but his image for “Please” is very powerful and masculine, leavings fans in a state of curiosity over what his performance style would be like.
His mini-album contains a total of six tracks, including an intro titled “Let Me Go“, and of course, his R&B dance track,”Please”. The title track, “Break Down”, is also the work of Ken Lewis, who has experience working with Eminem, Kanye West, and Usher. It’s described to have electric brass sounds with a synthesizer that elevates it into a dynamic, urban house-style track.
Stay tuned for its release on June 7th!
Source + Photos: My Daily via Naver
Diposkan oleh Hyunited6686 di Kamis, Juni 02, 2011 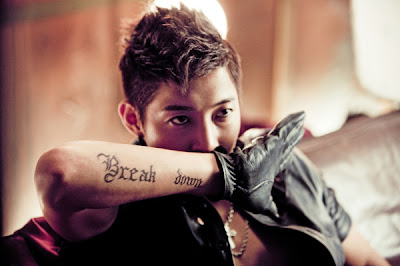 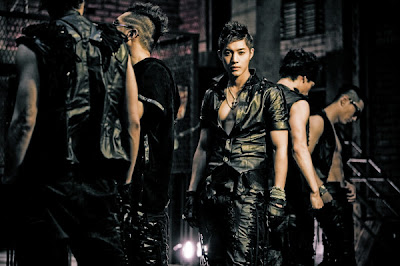 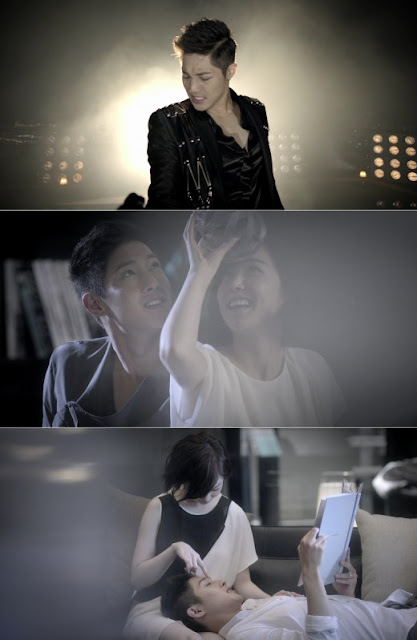 Last week, SS501’s Kim Hyun Joong officially kicked off his comeback preparations with the surprise teaser release for “Please“from his debut solo album, “Break Down“. He’s finally unleashed the full MV for “Please”, and it was definitely worth the wait!
Scenes were recorded at an indoor set on May 16th, and the entire production was overseen by directorJo Soo Hyun, who’s known working with TVXQ, Big Bang, and SNSD. Kim Hyun Joong was joined by actress Kim Min Seo as his special love interest.
KeyEast stated, “Before the release of the mini-album’s title track, ‘Break Down’, we have decided to release ‘Please.’ This music video is the work of some of the top staff in Korea, and we are sure fans are looking forward to seeing his new image.”
Check it out below!
Kim Hyun Joong will be holding his debut showcase on June 7th before dropping his full mini-album on the 8th and then beginning his full-scale album promotions.
Diposkan oleh Hyunited6686 di Kamis, Juni 02, 2011

[The Please MV Storyline] It's about a guy (KHJ) seeing his ex-girl going into the house of a diff man. Hence the guy watching from the car is KHJ. But he imagined that the guy with the girl is himself and once inside the house, even with the blinds closed by the guy, he could still see their intimate actions. So he imagined himself kissing her and holding her as he watched the shadows dance behind the curtains, as he sat in the car, reliving their past memories. As he relived their happy memories (hugging, ice-cream feeding, bed-scene), it also brought him to the scene of their break-up, when he saw her not wearing their ring and he suspected she cheated on him. They broke up after that. In the song, KHJ sings that he wished the rain that nite would wash away those dark memories, as he wants her back. He regrets letting her go. That's how much he loves her, even when she cheated on him. But he knows the wish is in vain, so he finally drove away.
Diposkan oleh Hyunited6686 di Kamis, Juni 02, 2011