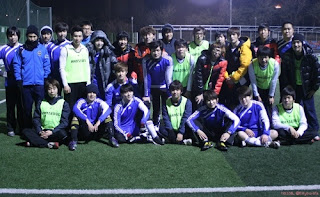 ﻿“…..the pants and the shoes that he wore were presents from fans… ^^”
Kim Hyun-joong, JYJ’s Jun-su, and his twin Zuno were all featured in a twitter photo posted by Zuno.
The following is what he tweeted about the photo:
“Aha~ Today we won over our game with STX with a store of 5:0. Junsu assisted on 1 goal and scored twice. Jihwan scored 1 goal, Hansol 1, and Kyungsong 1. We won our game with Hawseung with a store of 5:3. Junsu scored 2 goals and assisted twice and Hyunjoong scored 3 goals. I play defense so I didn’t score, but I’m really tired because I’ve been running around so much T_T I better get to bed”
One Kim Hyun-joong fan site stated that the singer/actor actually wore presents fans have given him during the games. He wore the pants and shoes…I wonder if his socks or underwear were from fans too? It does not hurt to ask!
What do you think about the athletic idols? Do you prefer their performances on the field or on stage?
Diposkan oleh Hyunited6686 di Kamis, Februari 10, 2011