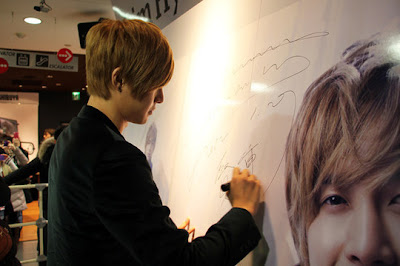 On January 29th, Kim Hyun Joong set up a guerrilla fan meeting for his Japanese fans!
He made a surprise visit at the Ginza Yamano and Tower Records stores in Shibuya and sat down with fans that were in the area. Kim Hyun Joong had actually been on his way to another schedule when he decided to make an extra stop. News of his stop spread on social network services, and within minutes, fans swarmed to the scene.
Kim Hyun Joong also had the biggest booth in the Tower Records store out of all of the other artists that released albums around the same time. A large scale screen plays his music videos along with a small photo exhibit.
The singer greeted fans with a warm smile and thanked them for coming all the way despite it being a short meeting.
Diposkan oleh Hyunited6686 di Kamis, Februari 02, 2012