Original news link: http://ent.jxnews.com.cn/system/2012/01/06/011870532.shtml
(dated Jan 6, 2012; 2.50pm local time)
Source: Sina Entertainment, via ent.jxnews.com.cn
Translated by: OnlyKHJtimes (onlykhjtimes.blogspot.com / @OnlyKHJtimes on Twitter)
[All reposts must be with full credit and link back to site] 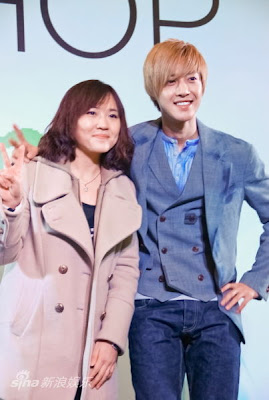 Sina Entertainment described popular Korean Star Kim Hyun Joong as the little Heavenly King of the new generation Hallyu Wave, (a term that we) trust is definitely not over the top; the two solo albums released in 2011, whether in terms of reputation or sales results, were dazzling and led to a new peak in Kim Hyun Joong's solo career.
The Kim Hyun Joong today is not just Kim Hyun Joong - leader of SS501, nor is he the 'National Sunbae' in the Korean version of Boys Over Flowers anymore; he is the Kim Hyun Joong with a go-all-out personality (OKT: meaning always focused, giving his best to get a job done).
Since TheFaceShop expended huge investments to sign on Kim Hyun Joong as its brand ambassador, the sales records that was repeatedly achieved and the explosive scenes from TheFaceShop's Asia Tour Fan-meet in the second half of 2011 were enough to prove the market value (commercial power) brought about by Kim Hyun Joong. This time, TheFaceShop chose Beijing as the first stop for his China Tour and this can be considered to be a warm New Year's gift to all highly anticipating Chinese fans.
On the day of the fan-meet, Kim Hyun Joong gifted fans with his personally autographed products and posters and posed for photographs with fans to commemorate the event. When lucky fans received the New Year gifts that were personally given to them by Kim Hyun Joong, the explosive atmosphere was set off, with cheering screams filling the entire venue. Following that, Kim Hyun Joong officiated the opening of a new store for TheFaceShop, attracting many customers and stopping on-lookers in their tracks.
Fans who were able to get in close contact with Kim Hyun Joong were amazed by his delicate skin, praising him to be truly qualified to be a brand ambassador. Kim Hyun Joong also promised that he would soon come (back) to Beijing to hold a solo concert here.
Before completing his Beijing schedule, Kim Hyun Joong spared some time to share with friends of Sina about his feelings during this visit and his plans for the year 2012.
SE = Sina Entertainment
KHJ = Kim Hyun Joong
SE: Please say hello to Sina's netizens!
KHJ: Hello to all Sina netizens. Happy New Year, I am Kim Hyun Joong.
SE: Visiting Beijing for TheFaceShop's Beijing Fanmeet this time, any special feelings?
KHJ: I feel very happy to be able to come to Beijing to meet fans here, (and) very thankful to fans for not being afraid of the winter cold and coming to support this activity. And I feel proud that many fans have come to know and love TheFaceShop brand through me.
SE: Your schedule of activities is so busy - do you have any special beauty tips?
KHJ: Just like you said, this year's schedule is really filled to the brim, the length of time with make-up on is also longer, so I place great importance on the process of make-up removal - so I pay more attention to such products.
SE: Besides skincare, to maintain your condition, do you keep to any special physical training?
KHJ: The two albums released this yeare were also dance songs, so to be familiar with the choreography, will train extensively everyday; I personally love to sweat it out - dripping sweat after every training session makes me feel refreshed.
SE: Korea's cosmetics industry is now very prosperous - what was the reason that made you choose to represent TheFaceShop brand?
KHJ: Indeed there are increasingly more Korean cosmetics brands that are getting attention in the market today, but I feel that my image and that of TheFaceShop is more compatible. Personally, I do not seek for overly glamorous things, I prefer a more natural and refreshing feel - this is why I have chosen to represent TheFaceShop.
SE: In 2011, (you have) held TheFaceShop fanmeet in various countries in Asia and let fans from different places to get closer to Kim Hyun Joong. And in the beginning of 2012, (you have) chosen Beijing as TheFaceShop China Tour's first stop. Following this, are there plans to hold fanmeets in other cities?
KHJ: Apart from Beijing, (we) also plan to go to Shanghai, Shenzhen and other cities to hold activities there. At the same time for 2012, plans are in progress for my personal World Tour. Hopefully by then will have the opportunity to go to more cities to meet with fans.
SE: What range of TheFaceShop products does Hyun Joong use lately?
KHJ: I have always been using the BB Cream and some make-up removal products. A lot of fans gave me feedback that they also really like the BB Cream.
SE: Soon, Valentine's Day will be upon us in February. Can Kim Hyun Joong suggest to our female fans how to choose beauty products for their boyfriends?
KHJ: Because the winter days can be a little dry, I would suggest choosing some moisturising products. And since it's for Valentine's Day, then choose something with a sweet fragrance.
SE: Let's talk about what fans are more concerned about - Hyun Joong's work schedule in 2012. Because it has been quite a long while since your last film/television work, is there any plan in the pipeline for new film/television works?
KHJ: Actually previously, there was a plan for a drama, but due to some objective reasons, it has been delayed. But I believe in the not-too-distant future, (I) will come up with something better to greet everyone. And this year's solo World Tour is in the midst of preparation - I believe it will be held in many places.
SE: For 2012, is there any New Year wish?
KHJ: If 2011 is said to be the year I gained attention through my solo debut,  then I hope 2012 will be the year I gain more public recognition. I will work harder to make more people pay attention to my music and like my work and to fans, please support my work.
Ends
Diposkan oleh Hyunited6686 di Minggu, Januari 08, 2012